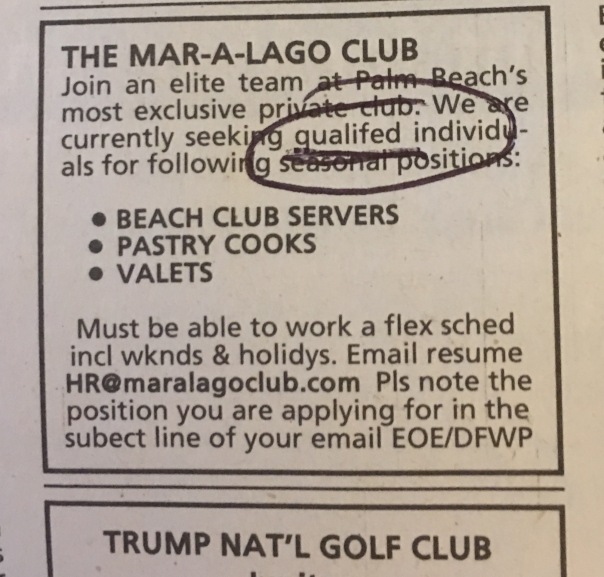 It’s been nearly two months since the ad for various Mar-a-Lago workers first appeared in Jobs section of the The Palm Beach Post under the “ food services/hospitality” heading.  That’s a long time for any ad to run.

What might be even longer is that the box showing the job opportunities at Mar-a-Lago has a typo in it that’s never been corrected.

I’ve heard that our president isn’t much of a reader but that’s no excuse for those who write the ads, or place them and didn’t see or correct the obvious error.

Kind of a funny typo given the size of President Trump’s ego.

The private club will be opening soon and apparently is still seeking beach club servers, pastry cooks and valets. Hourly pay varies but is dollars better than Florida’s minimum wage of $8.10 an hour ( it’s going up to $8.25 in 2018).  And,  I’ve heard that tips for the valets can be quite generous. Even is they aren’t,  it’s gotta be a trip to drive the club’s members’ cars.

That said, anyone who would like to work in the Winter White House can either pick up an application at the gate house of the club/estate, or send their resume to: HR@maralagoclub.com.