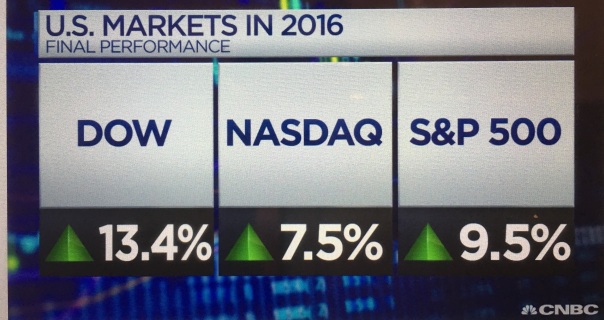 If you were in the stock market in 2016, odds are you made money.

According to CNNMoney, 77% of investors made money. How much? OpenFolio reported that the average investor enjoyed a 5% increase in the value of their investments.

Unfortunately, men’s portfolios outperformed those owned by the ladies, reports that same source. Which, BTW, is nothing new. That trend has been going on for the past three years. Oh my.

Here are a very few of the best and worst performing stocks in 2016:

Although no one knows how the markets will perform in the short-term, as in 2017, the  chart below, cockeyed as it is, shows how the DJIA has moved over the past 10 years, from 2007 through 2016.  (Source: It and the chart at the beginning of this blog are pictures  I took of charts  found at CNBC.com on Friday, December 30, 2016.)

All was shiny and bright for many stock fund investors as at the close of business on Thursday, Dec. 29, 2016, the performance of the average U.S. Diversified Equity Fund was up 11.23%, off a bit from the previous week’s clost of 11.53%, according to Lipper.

Under that broad heading, Small-Cap Value Funds’ scores were the highest with the average return up 27.25%. Dedicated Short Bias Funds were down the most, off 25.69%.

Under the Sector Equity Funds heading, where the highest gains (and losses) are likely to be found, Precious Metals EquityFunds were the winners—up on average 58.53%. Biggest losing group? Commodities Specialty Funds, down 15.13%.

And, the average General Domestic Taxable Fixed-Income Fund ended the year up 7.47%.

•Hoping 2017 is a happy, healthy and rewarding one for all of us!